What is the compressed towels?

Compressed towel, also known as micro-shrink towel, is a completely new product, The volume is reduced by 80-90% than normal towel and it swells in water and left intact when in use. The compressed towel is not only convenient for transportation, carrying and storage, but also has new functions such as appreciation, collection, gift, health and disease prevention, which endows the original towel with new vitality and add another dimension to the product. After the trial product was put on the market, it won the majority of consumers love. 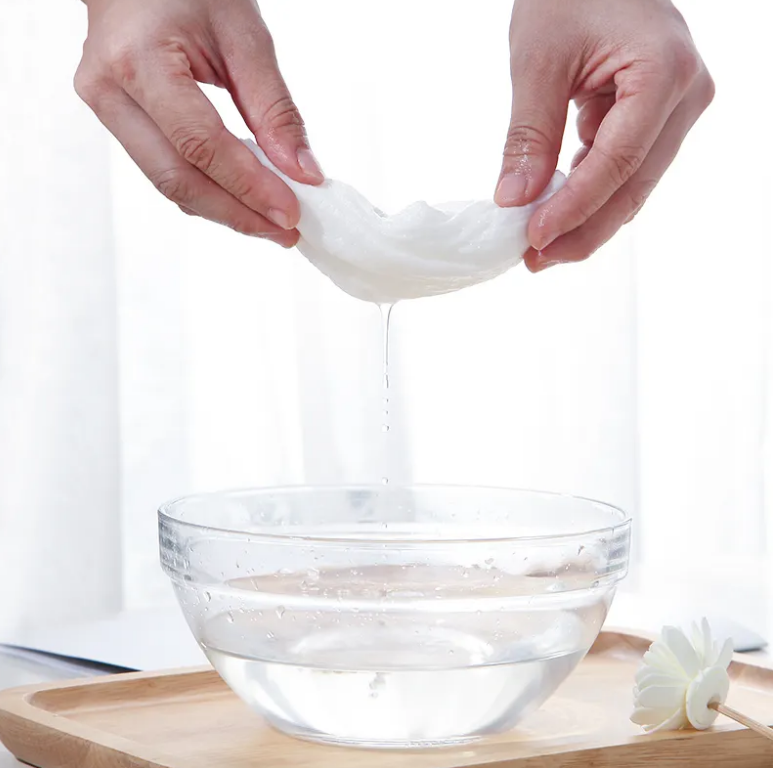 Knitted compressed towel: We make the existing towel enter into secondary processing as raw material, and it is expensive. Usually, the volume of such kind of towel is larger than non-woven compressed towel, and its texture is up to original knitted fabric. In addition, the unrolled towel is the same as ordinary towel, which can be used repeatedly.

Non-woven compressed towel: It uses ordinary non-woven cloth as raw material and is characterized by low price, small volume, common feel. It swells in water, and it relatively feels slightly worse than ordinary towel. Also, it’s easy to break, easy to drop debris, and generally can not be used repeatedly.

Full-cotton spun-laced non-woven compressed towel: It uses natural fiber cotton as raw material and is characterized by cleanliness, soft feel, mild and comfortable texture, adequate stretching. It also swells with water with great water absorption capacity , and it’s not only no harmful to skin, no losing scrapes with good toughness, cleanliness and convenience, but also can effectively prevent bacterial cross infection. In addition, it can be used many times with relatively high quality. 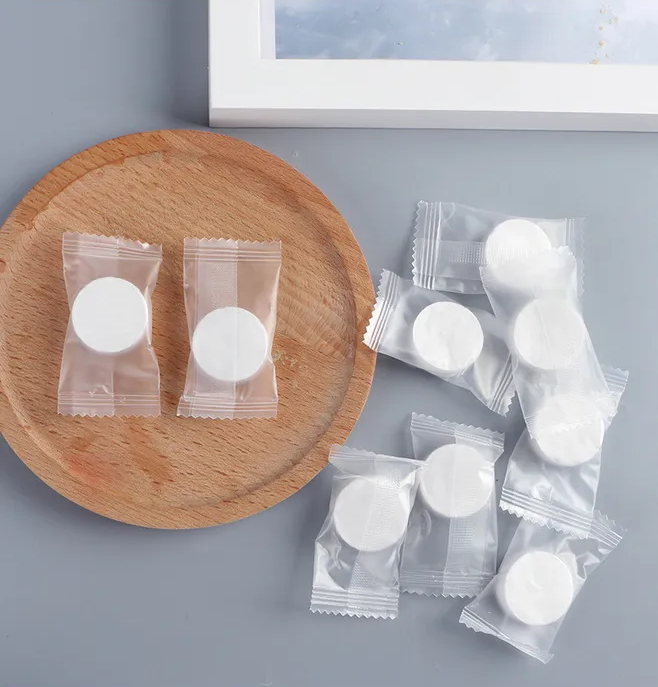 Compressed towels are not 'disposable'

Whether the towel is disposable or not is judged by the quality of the compressed towel and the hygiene requirements of the user.

Normally, after using a compressed towel once, you clean it, dry it and put it in the water again. If it doesn't break easily and doesn't come off flakes or anything like that, it can be reused. 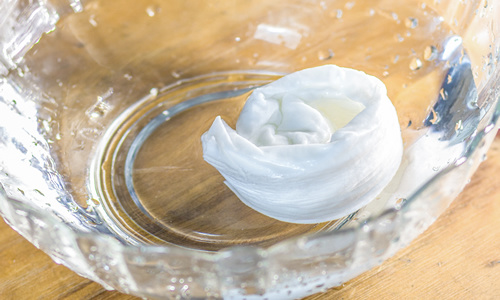 Non-woven fabric (also known as non-woven fabric) uses poly grain material as raw material, it usually experienced continuous production steps like high temperature melting, spinneret, laying, hot rolling. Because of the appearance of cloth and some certain properties, it was called cloth. In fact, it is a kind of chemical fiber product as well as a new generation of environmental protection materials, which is characterized by water repellent, ventilate, flexible, non-combustible, non-toxic non-irritating, colorful and other features. However, it is not suitable for using as face towel.

Full-cotton spun-laced non-woven fabric, also known as pure cotton spun-laced non-woven fabric, is made of natural fiber cotton. Through opening cotton and loosing cotton, the use of tip carding machine, net laying machine and drafting machine, the pure cotton was made into a net. And people make the column formed by large density and numerous needle-like water pressure go through the spun-laced machine to make cotton fiber wrapped into cloth. 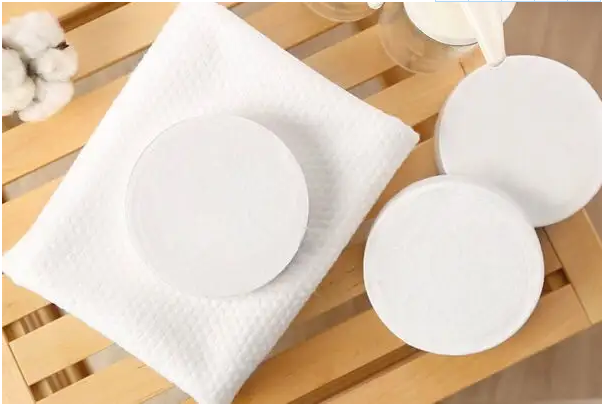 The compressed towel is sterilized by ultraviolet light, and the shell adopts advanced PVC encapsulation technology, so that the product does not directly contact with the air, and the compressed towel effectively avoids product pollution. The new compressed towel machine is made up of a frame, intermediate skateboard, hydraulic system, which is also characterized in that it includes the upper die, the lower die, guide rail, drawing plate, castor. Besides, it uses a combination of the lower die, and the two groups of lower die are interchangeable with each other. In addition, castor design makes the lower die and the drawing plate move lightly, and the upper and lower die can be replaced according to the requirements of the shape of the compressed towel,which is suitable for the production of high efficiency compressed towels made of nonwovens and woven fabrics. With the feature of full automation operation, it’s more capable of automatic die compression. The intelligent control system make the process from raw materials to the finished product go smoothly. It improves production speed and reduce production cost while ensuring safety and health. 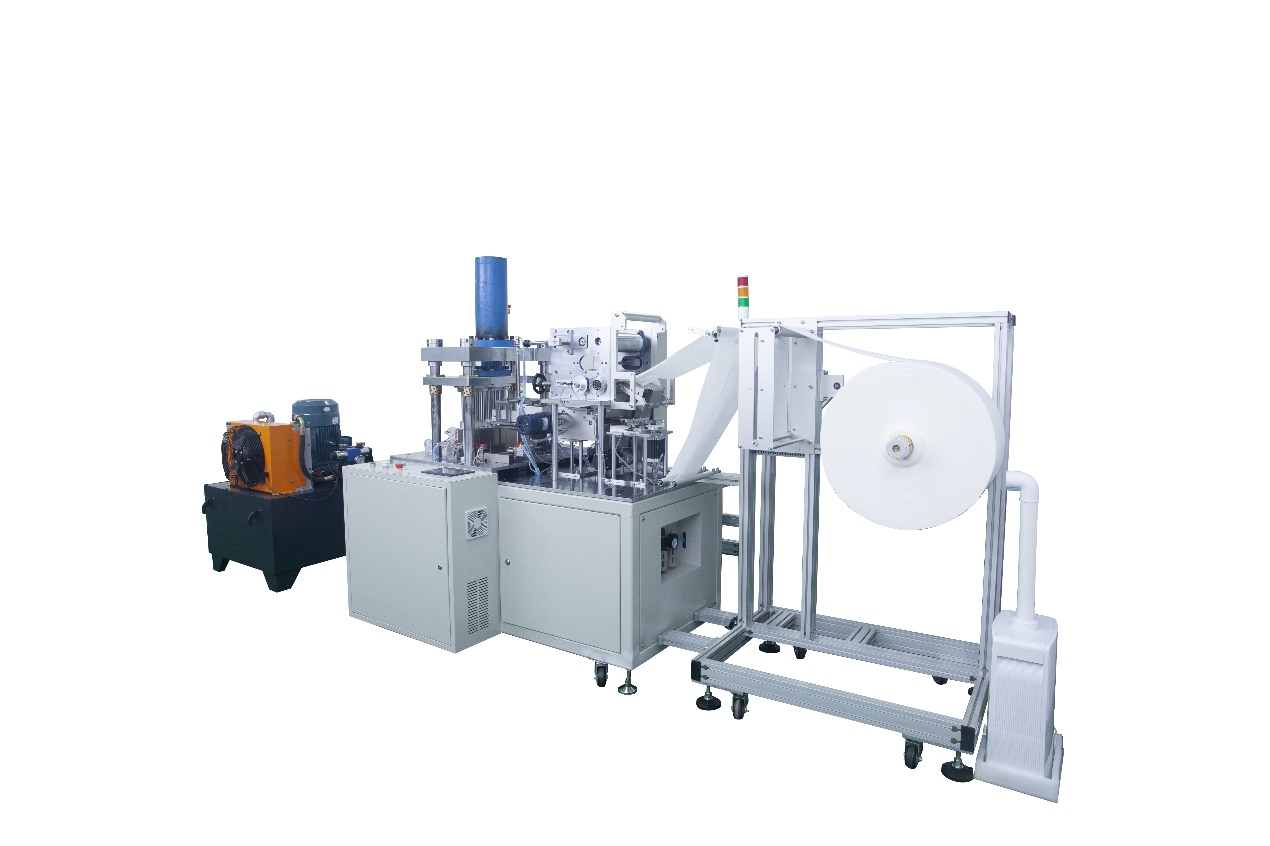